Happy to see you all with the help of Muthufan, who created this blog for me.

We know, Late Mullai Thangarasan, stands tall in Tamil Comics world. He was the editor of various comics and children magazines and creator of various children literatures.

How many of us aware of his creation of comics characters?

Jam-Jim-Jack, Minnal Mayawi, Irumbukkai maya mayavan, in this series, there was a character he created, that was "Captain Moorcock", when he worked in Ratnabala. 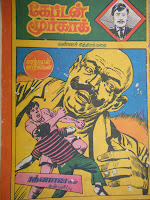 Moorcock's first comic's appearance was published as free gift with Rathnabala titled Saththan Sarangan and nothing much was known about the history of Moorcock. 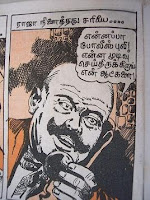 The incumbent Raja never gives up. 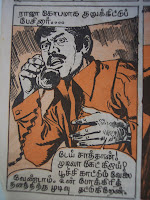 So Saththan Sarangan put the kid in cemetery and closed as his word it is "Dead as Alive".

OK, who is the captain Moor cock? Here we came to know! 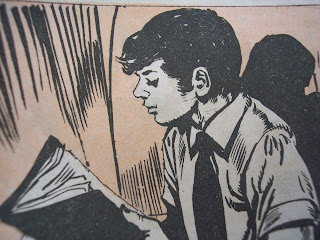 Kid Babu finds a match box from cemetery and when he lit, who sees a candle, book and a box. When started reading the book, the kid Babu understand that this cemetery is of the worlds most righteous and just captain Moorcock and It is Moorcock's will that who enters his cemetery first will be his offspring. Then Kid Babu taking this as challenge to spread captain Moorcock's adventures to the world. Finally there are 2 diamonds inside the box. One was white and the other was red. He would become the strongest and huge man can fly if he puts white diamond into his mouth. He would become a tiniest man if he puts red diamond into his mouth. Kid Babu declared himself to utilize this to do righteous things. It was also written in the book that the power of the diamonds will disappear if he supports the unjust. Kid Babu utilizes the power of the diamonds and brings the Saththan Sararangan and Co to the justice.

From the creation of this character, it seems that Mullai Thangaran had twin plans:

Like phantom stories, spreading the captain Moorcocks' adventures to the world may a plan and the other plan may be publishing this as a series.

Kid Babu was very clear at the end of the page as he poses those miracle diamonds. When the comics ended with the sentence, Better wait and see what he would do with them, it seemed that Mullai Thangarasan wished to create like Jam-Jim-Jack character, by using kid Babu Character.

Mullai Thangarasan created atleast 10 comics stories on every character. As character of captain Moorcock, as far as I know, he made only one story. Probably the reason is that he quit Ratnabala immediately after that. His every breath and thinking was only comics because he passed away in an accident while he was heading to Bombay to buy comics the re-publishing rights. 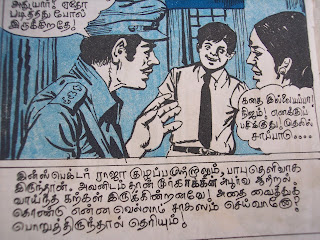 One more interesting character he has created was Jam, Jim and Jack(in fact a set of 3 characters). We will see more about this character very soon. 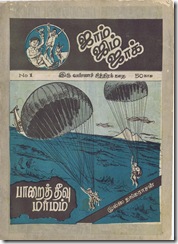 Please let me know what you feel about this post. Leave your comments in the comment section below. 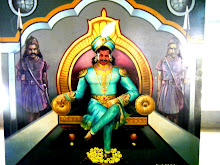 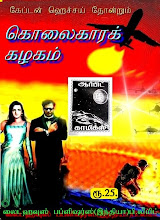 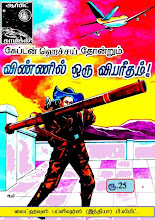 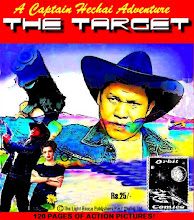 THE KNIGHTS OF TANGLE 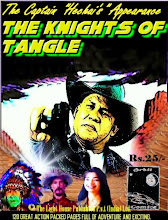 SHADOW OF THE TRAIL

I am about me, (View my complete profile)

HAJA ISMAIL.M
Adirampattinam, Tamil Nadu, India
,As I know, I am an aggressive fan of Comics. I would speak here about the comics and characters I enjoyed and loved a lot.